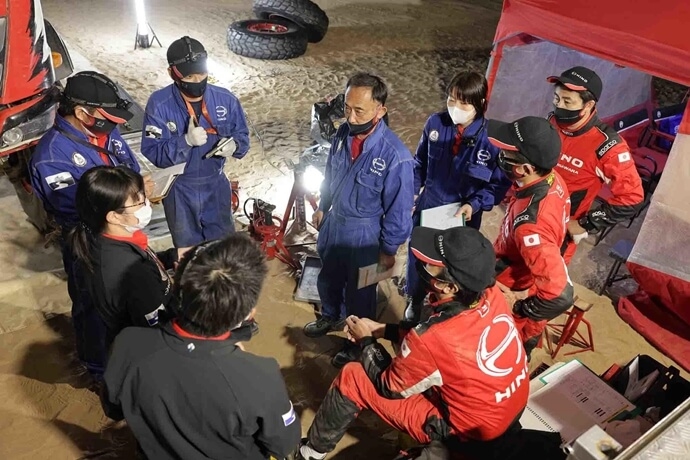 The first SS (competition section) for the Dakar Rally 2021 was held from Jeddah up to Bisha with Teruhito Sugawara, Hirokazu Somemiya and Yuji Mochizuki of Hino Team Sugawara who finished 18th overall in the truck category and 1st in the class with a displacement of less than 10 litres.

The SS was set over 276km from the mountainous area that moved 311km east-southeast on the liaison (moving section) from Jeddah along the Red Sea. The distance was not long, but it was varied, the road surface was sandy and soil, as well as rocky sections were all at risk of punctures. The navigation also had sections with many branch points, and the overall difficulty level was set higher for the first day.

As a result of the prologue on the 2nd, the Hino 500 Series truck started SS in 19th place in the truck division. It started running smoothly, but when it approached the rocky area in the first half, the front and rear tyres on the right side were punctured at the same time the dust rolled up by the preceding car.

The Hino service team had followed the assistance route from Jeddah and arrived first, where they had started work immediately after the general meeting. 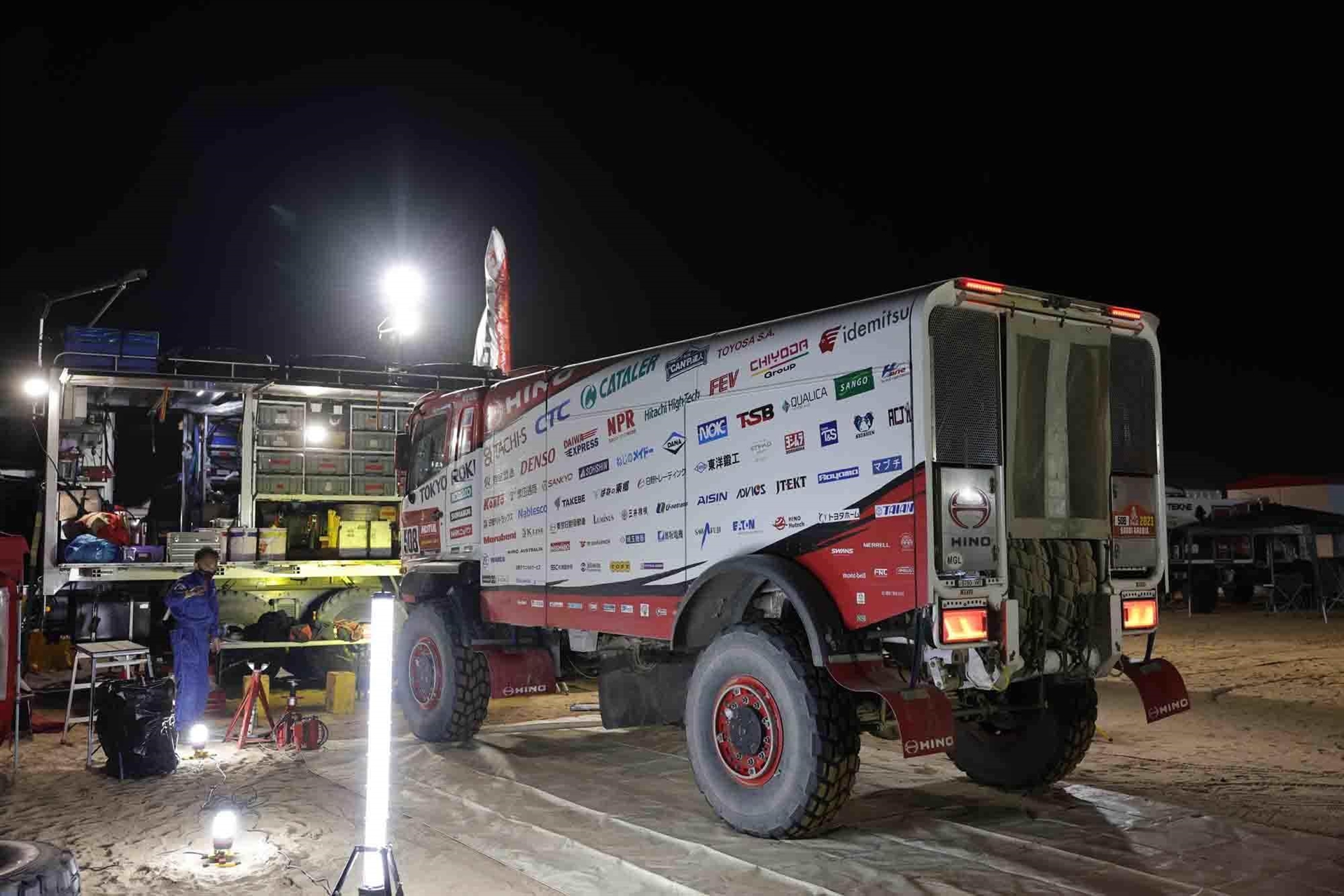 There was no major damage, but careful inspection and maintenance was carried out to increase the difficulty level for the next day.

4 days in between to Wadi Ad-Dawasir toward the east from the Bisha 457km of the SS is scheduled. The distance is long and a section over the dunes will appear, which is likely to be the beginning of a difficult stage.

“Two flat tyres at the same time in the dust. Since it was still in the first half, I ran a long distance at a slow pace, and I lost time.
In the feel of the vehicle at the time it began to run also expects because it was very good in performance.
I feel that this year's course setting is generally in the technical direction.”

“I missed the course at 212km. I made a mistake while there were many branches.
I feel like I'm stuck in a hook problem. I'm getting used to the LCD screen roadbook little by little, but the vibration is severe.”

“Replacing two tyres at the same time was difficult even though there were three people. I think it was a difficult course for the first day. I will do my best again from tomorrow.”

“This time, the Hino 500 Series truck will review the output characteristics and select tyres for Saudi Arabia, which has many dunes. We have made repeated test runs in Japan by changing the suspension settings. The number of service units has decreased slightly, but we all want to work together to achieve good results.” This stage is in the northern end of the Rub 'al Khali between Bisha to Wadi Ad-Dawasir 457kms of the SS (performs a competition section), Hino Team Sugawara are competing in the track department and finished in 14th place overall (1st in the class with a displacement of less than 10 litres).

Although the SS to Bisha on the previous day suffered a puncture and the difficulty of navigation on the first day, the participants entered the full-scale sand dune area early on the second day, and the difficulty level of this tournament was once again due to the long distance.

The SS starts from a point 135km north of Bisha. On the S-shaped route, heading toward Wadi Ad-Dawasir on the east side, there were various changes such as sand dunes and ergs (sand ridges lying on the plateau), high-speed sections of sand, and winding. The Hino 500 Series truck, which was equipped with tyres that are good at sandy roads, ran smoothly through the dunes, taking advantage of its high mobility. The team was about to get stuck several times, but cleared it without being buried, and after that ran through the section with stones in the sand without a flat tyre.

SS after the end of the 93km was reached in Wadi Ad-Dawasir in liaison (movement section) of. The place on the flat plateau was the place the team had visited in the previous tournament. 5 days a loop around the "empty quarter" vast Rub 'al Khali, to a base point here 403km the competition is carried out.

“The feature of the tyres selected this time is that they can run in the sand without loss. It suits today’s stage and I was able to run comfortably. Some dunes have strong swells like South America, so I felt it was difficult to set the course this year.”

“Today, most of the sections had no roads, but there was a rut with the preceding car, and navigation was not so difficult because we only saw the direction in the dunes. I was tired from the long stage after a long time, but it was good.”

“I operate the tyre pressure regulator (CTIS) in the centre seat, but I felt the slow response to the operation in today's dunes. It seems to be a problem with the control software, so I would like to confirm it." 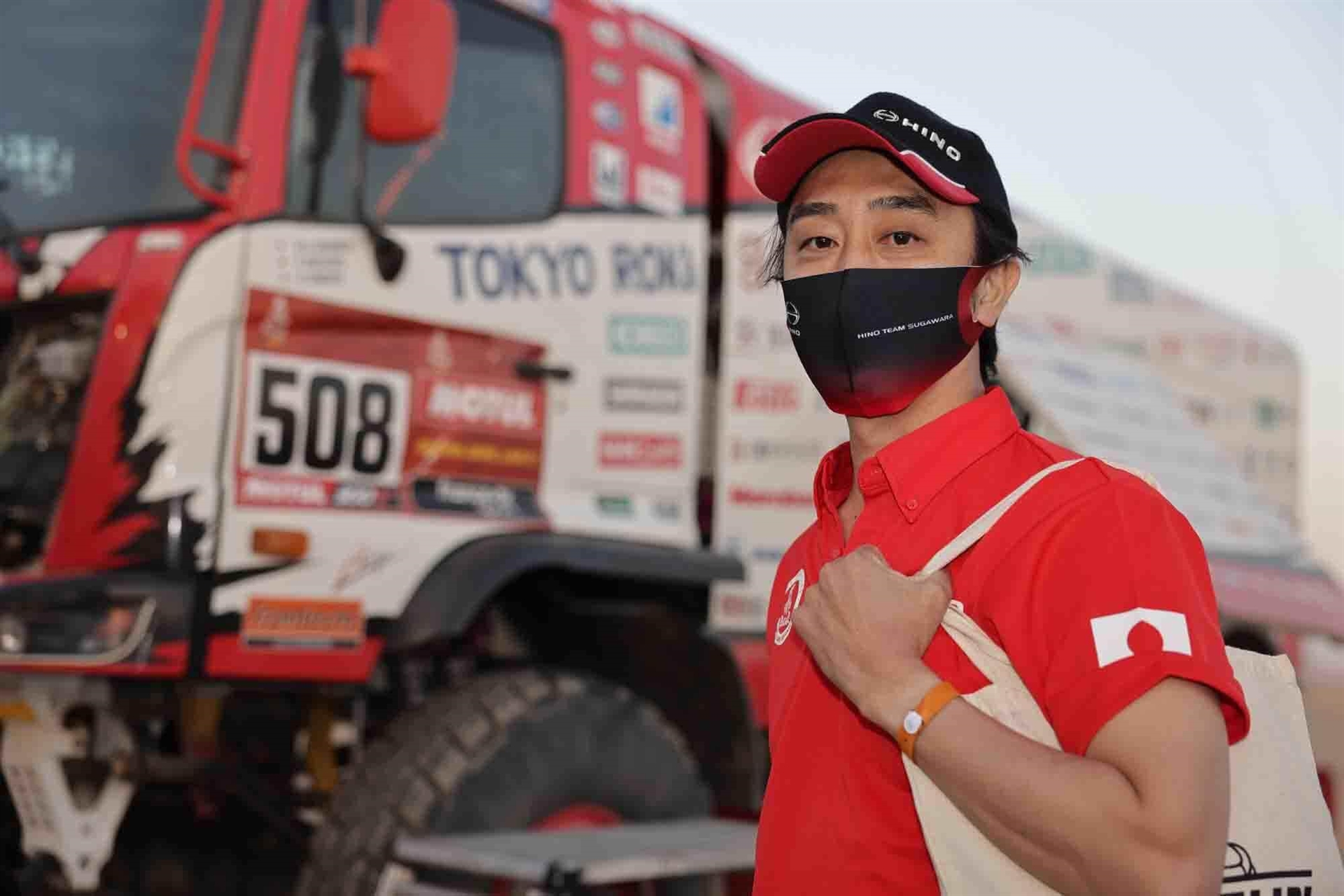